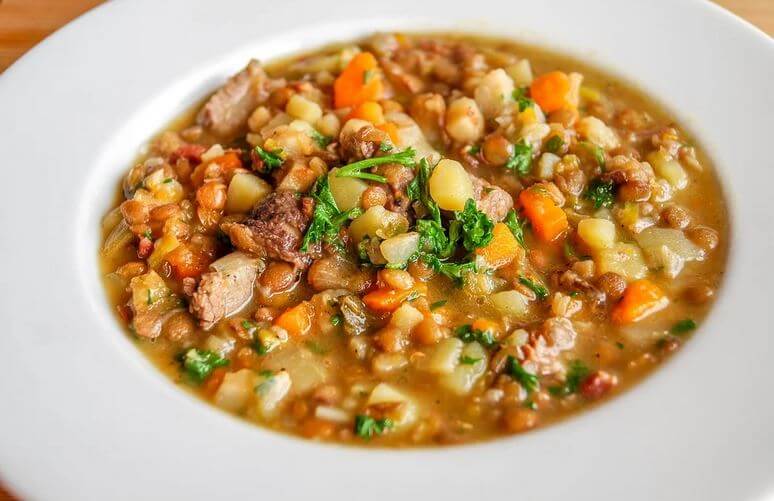 Joe Booker stew, a fairly ordinary stew made with veal or beef, plus all the usual suspects in the vegetable department, topped sometimes with dumplings, seems to be a Boothbay specialty. I heard about it when Lynne Olver, the creator and maintainer of the Food Time Line website, wrote to ask me about its origins. Because there was a Maine connection, Lynne sent me what she turned up on the stew.

She wrote, “We’ve only been able to confirm the name (in print) to 1939. We read your stew notes in Saltwater Foodways. The recipe is certainly traditional New England fare. The name, however, appears to be a recent label meant to conjure up “the old-fashioned” days.”

Lynne further wrote: “Our survey of historic newspapers revealed two famous Joe Bookers: (1) Southern military figure circa Civil War and (2) Chicago gangster, circa late 1920s. Neither seems a likely candidate for a Maine stew title. But, hey, weirder things can happen in the world of culinary history.” And they do. She then cited Imogene Wolcott’s The New England Yankee Cook Book, facsimile 1939 reprint [Cookbook Collectors Library: Favorite Recipes Press], p. 75: “When the men came in from cutting ice or chopping trees, “Joe Booker” was their favorite dish. Elderly residents of Booth Bay Harbor cannot recall for whom or by whom the dish was named, but the stew is still popular in Maine.”

I checked all my Maine cookbooks for Joe Booker stew — community cookbooks, Cooking Downeast and all—no Joe Booker. How popular Joe Booker stew is Maine-wide is my question. I suspect Imogene Wolcott made that up. In Boothbay, according to resident food writer, our own Karyl Bannister, Joe Booker is remembered as a Revolutionary era soldier and locals believe the stew was named for him. The parsley dumplings that are suggested in some versions are a 20th century fillip.

I’ll bet this is a hyper-local dish. Does anyone (not from Boothbay) as far away as New Harbor or Bath, know Joe Booker stew by this name? Let’s hear from you, if you do.