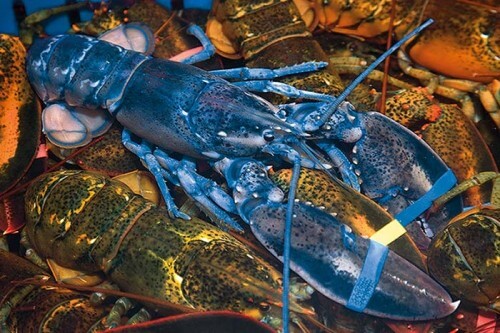 Imagine our surprise when we found this blue beauty hanging out at Jess’s Market in Rockland. Jim said he “had to take a photo of this lobster” since it was so unusual. It was only later that we agreed this image belonged on the cover of our current magazine issue.

The blue lobster is a rare crustacean native to the North American seaboard. In fact, only one in two million lobsters is blue. A genetic defect causes a blue lobster to produce an excessive amount of protein. This protein, and a red organic pigment molecule known as astaxanthin, combine to form a blue complex know as crutacyanin, giving the lobster its blue color. Every time the blue lobster molts, its color becomes a brighter blue.

Although the blue lobster is very rare, the albino lobster (one in 100 million), the half-and-half (colors perfectly divided on each side of shell…one in 50 million), and the yellow lobster (one in 30 million) take the “most and more rare” honors. And our blue lobster won’t begin to measure up in size to the record lobster from Nova Scotia…with a length of 3 1/2 feet and a weight of 44+ pounds. Even a true Mainer would have trouble eating that one, at least in one sitting.

Despite the impressive credentials these other lobsters have, the “Best In Show” award will definitely go to a blue lobster…at least if we are voting.