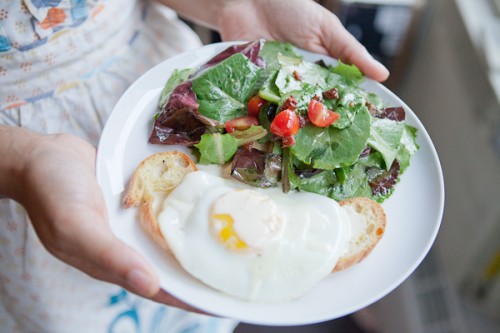 The French Culinary Institute alum dishes out a savory recipe for a light and scrumptious meal perfect for breakfast, brunch, lunch or dinner: toasted garlic crostini topped with a fried egg drizzled in a rich Parmesan cream sauce, and a mouth-watering romaine salad with homemade bacon vinaigrette.

Place the bacon in a large, deep skillet, and cook over medium-high heat, turning occasionally, until evenly browned, about 8 to 10 minutes. Drain the bacon on a paper towel-lined plate and reserve the fat.

Make the vinaigrette – Whisk the balsamic vinegar, Dijon mustard and honey together in a mixing bowl. Slowly drizzle in the bacon fat and olive oil while whisking rapidly until the salad dressing is thick and creamy.

Toss the baby romaine, apples, cherry tomatoes and bacon crisps with the vinaigrette.

Make the Parmesan cream – Heat the milk in a heavy saucepan over medium heat until bubbles form at the edges. Reduce the temperature to low and stir constantly until the cream coats the back of a metal spoon.

Remove from heat and stir in the Parmesan cheese.

Make the crostini – Lay bread slices on a foil-lined baking pan. Brush each baguette slice with extra-virgin olive oil and season with salt and pepper.

Toast the bread slices and rub each slice with the garlic.

Assemble – Layer an egg, Parmesan cream, crushed or sliced almonds on a toasted baguette slice. Garnish salad and crostini with tomatoes and serve.